Synthetic dye’s impact on the environment

During the coloration process, a large percentage of the dye does not bind to the fabric and is lost to the wastewater stream. Approximately 10-15% dyes are released into the environment during dyeing process making the effluent highly colored and aesthetically unpleasant. Public perception of water quality is greatly influenced by the colour. So, the removal of colour from wastewater is often viewed as more important than the removal of the soluble colourless organic substances. 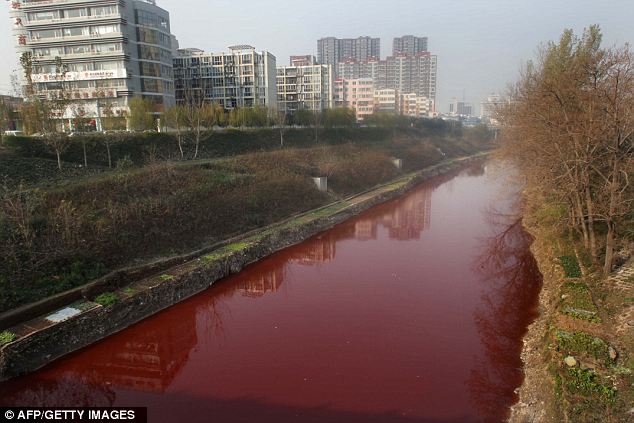 Such was the case in 2011 in northern China when the Jian river turned red as the result of an illegal dye dump from a local chemical plant.

Local residents and farmers near rivers which have been turned different colours have reported health problems and wonder if the food they are obliged to grow in nearby fields is safe to eat, reporting also that all the fish died, and the lifeless river turned to sludge. The dying process discharges many chemicals through the polluted water and chemicals, which results in the death of aquatic life, the ruining of soils and poisoning of drinking water. The environmental impact of the colouring process is significant and the laws that are in place, have been seen to be not well enforced, such as in China, as can be seen with the Jian river incident.

During the dyeing process an average t-shirt will use 16-20 litres of water, which means that on average, the global textile industry discharges 40,000 – 50,000 tons of dye into the water system. A great environmental concern with dyes is the absorption and reflection of sunlight entering the water. Light absorption diminishes photosynthetic activity of algae and seriously influence on the food chain as the algae are the base of the food chain, thus affecting every organism above it. The lack of algae is one of the main reasons that the aquatic life suffers in areas that dyes are discharged, but another is because of the toxicity of the dyes themselves.

A man swims in the algae-covered Han River in Wuhan, Hubei province, on 11 June, 2014.Reuters

Clothing comes into prolonged contact with one’s skin, the largest organ, and so toxic chemicals are often absorbed into the skin, especially when one’s body is warm and skin pores have opened to allow perspiration. This absorption has been shown to cause significant health effects, such as an increase in tumours. They have been shown to have carcinogens, as they are made with many chemicals. Textile dyes can also cause allergies such as contact dermatitis and respiratory diseases, allergic reaction in eyes, skin irritation, and irritation to mucous membrane and the upper respiratory tract.These diseases are most prevalent in the workers who are dyeing the clothes as they are around the chemicals all day. These workers are literally dying for fashion.

Organic manufactures are investigating ways to treat their clothes with dyes made from organic materials and bacteria, rather than chemical treatments. These treatments are both more safe for the environment and for the workers. Natural dyes are made from plant and animal sources, such as indigo, cutch, weld, madder and cochineal, but also require exorbitant amounts of water usage. The natural dyes can create similar colours to those made synthetically, but the benefits to health and the environment allow them to be a far better choice as they have a carbon neutral footprint. They are perfect to be made at an artisanal level, which would promote smaller businesses. Natural dyes are currently being developed and the variety available is greatly increasing. By buying clothes dyed with natural fabrics you will be supporting the natural dying processes and soon hopefully natural dyes will be as abundant, or more, than synthetic dyes. This is a much better option than the normal synthetic dyes that are typically used, and when buying clothing, should be something to look for.

An Interview with Jennifer M. Brown of Under the R...
From France with love: an open call for support
MONSANTO’S SEEDS OF DEATH
How many clothes do we waste?
Redefining Sportswear Fashion Industry

12 thoughts on “Impact of dyes”