Three little words that make a huge difference to consumers in the US. The terms conjure up sentiments of patriotism from Americans and calls for buying American-made products have become a slogan for union leaders and those working in the manufacturing sector. Why should these three little words invoke such strong responses from our southern neighbours?

Simply put, American manufacturing is a big deal – it supports over 17 million jobs across the country and contributes over 12% to U.S. GDP. Buying products with the Made in USA label keeps those jobs going and workers employed. So When you see the label ‘made in USA,’ you can be assured that what you just bought is wholly, 100 percent American-made with American materials, right?

Product is assembled in the U.S. Most parts or materials are Made in USA. For a product to be called Made in USA, it must be “all or virtually all” made in the United States,This includes the 50 states, the District of Columbia, and U.S. territories”All or virtually all” means that all significant parts and processing must be of U.S. origin. The product should contain no — or negligible — foreign content.

Made in USA with foreign and domestic components

Some materials or parts are Made in USA

Packaging displays USA flag, map, or “American” are part of the brand’s name

This is an implied statement of American origin. Look for fine print to see where the product was actually made. Without such a statement it is questionable at best.

Distributed for, manufactured for, or product of

Since this has no statement of American origin, actual or implied, it cannot be considered to be USA made. Falsely labelling a product as USA made is also against the law.

Made in USA certified

The best way to know if a product is entirely made in the US is this label. This is the United States’ Non-Governmental Organization (NGO) and independent 3rd party Certification Source for “Made in USA, Product of USA – Country of Origin Claims”. 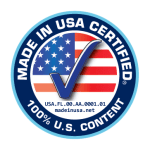 So. Why, you may ask, are manufacturers trying so hard to pass off non-USA made products as the real McCoy? The answer is that products that are made in America can fetch a much higher price than a product made in, say, China. Real or imagined, made in America has a connotation of higher quality, like German engineering. And people are willing to pay more for higher quality.

When a product gets slapped with ‘made in America,’ it means firms can charge more for that product, because people know that they are paying more not only for quality, but that they are paying more to support the American manufacturing sector and helping to keep American jobs from being outsourced to another developing country. What they don’t know is that many of these products are not actually made by American workers or materials, but they are still pricing the product as if it were, and profiteering from the price difference. Imagine if you were buying a t-shirt, and that t-shirt was made in India.

The cost of producing that shirt in India is much less than if it were produced in America because America has stricter regulations governing everything from environmental protection to minimum wages. So after the manufacturer slaps the brand name or ‘made in America’ label, the value of the shirt suddenly balloons to several hundred times more than ‘made in India.’ This is why many corporations employ shoddy advertising and deceptive marketing methods to make consumers think that they are buying ‘All American’ products, when they’re not.

Most people are aware of the apparel industry’s penchant for exploitative labour practices. It has often been strongly criticized for the use of sweat shop-like conditions in its east Asian factories. In May 1998, a panel of experts on international law condemned the violation of workers rights in the garments and sportswear industries; twelve witnesses from ten developing countries had testified on actual working conditions in the industry, pointing out seven leading transnationals: sportswear manufacturers Nike and Addidas, clothing traders H&M, Levi Strauss, C&A and Walt Disney, and the world’s biggest mail order company, Otto-Verstand.

But even if you’re not the bleeding-heart type, you should still care that you are being swindled and fooled into paying a premium that you shouldn’t have to, because if that product wasn’t really made in USA, then the premium you just paid didn’t go to support your fellow countrymen; instead it went into increasing the profit margin of some transnational corporation so that some CEO can demand a million dollar bonus because he/she has just met the target profit margin. I don’t know about you, but that really incenses me.

This is Will, current content coordinator at Trusted Clothes. Will is a writer at heart with a journalism print background. An award-winning writer and video producer, Will divides his time between super-heroing at Trusted Clothes and being a complete die-hard Star Trek fan. And wearing funny Captain Picard shirts too.